The Elite Skirmisher is an anti-archer ranged unit in Age of Empires II that can be trained at the Archery Range once the Castle Age is reached. They have an attack bonus against archers and, as opposed to its predecessor, an extra attack bonus against Cavalry Archers. They also have increased hit points, attack power, and pierce armor. This makes Elite Skirmishers more useful against other ranged units even beyond the Castle Age.

The Elite Skirmisher is available to all civilizations except for the Turks.

The upgrade to the Imperial Skirmisher is unique to the Vietnamese and their allies.

Most of the time, Skirmishers are very weak to everything except Archers, Hand Cannoneers, and Pikemen (to a degree). With a weak and slow attack, as well as a minimum range, they deal almost no damage to infantry and cavalry. Nevertheless, their attack bonus against archers can make them valuable against any archer-using opponent, especially if the player's civilization bonuses benefit infantry or heavy cavalry. Unless created to retaliate against enemy archers, each individual unit does poor damage and in most games, training Elite Skirmishers is avoided unless opponents are going heavy on archer units. Elite Skirmishers also have a +3 attack bonus against Pikemen, allowing groups of them to quickly take out approaching Pikemen, but their minimum range still makes them vulnerable.

While Elite Skirmishers make poor ranged support in small numbers, they are extremely cheap. As they cost no gold, they are considered trash units and can be easily massed in significant numbers enough to kill units with a single volley. The size of the mob of units should also prevent enemy units from coming close enough to all of the units, allowing them to continue to fire. Therefore the Elite Skirmisher becomes especially important in the late game when gold becomes scarce and players have to rely on a wood and food economy. In the trash wars situation their bonus against the Spearman line also becomes more useful.

The Elite Skirmisher and its predecessor, the Skirmisher, were the only ranged trash units until the release of The African Kingdoms, where the Berber Genitour was introduced.

The Skirmisher line, with the Elite Skirmisher in the middle, in Age of Empires II: Definitive Edition. 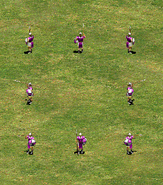 A group of Elite Skirmishers. 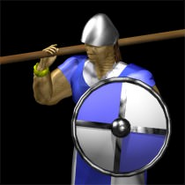 A render of the original Elite Skirmisher model
Español
Community content is available under CC-BY-SA unless otherwise noted.
Advertisement