Elite Eagle Warriors move quickly, have a long Line of Sight, conversion resistance, and an attack bonus against Monks. They also have an attack bonus against siege weapons and a small anti-cavalry bonus, however, almost every other infantry unit deals bonus damage against Eagle Warriors. Essentially, they help compensate for the Aztecs', Mayans', and Incas' lack of cavalry.

The Aztec Garland Wars technology provides +4 attack, making them better raiders, striking down an enemy Villager with just three hits. They are a good counter to archers and Monks. Although their attack bonus to cavalry units might make one think to use them against cavalry, this attack bonus is relatively small. If the Elite Eagle Warrior is compared to the Champion they end up with the same attack against cavalry. As such, they are better against cavalry than they might first appear looking at their base stats, but by no means should be considered to be a cavalry counter. Due to their weakness against other infantry, they are sometimes paired with the Aztecs' infantry destroyer, the Jaguar Warrior, or Arbalesters if Crossbowmen were used in the Castle Age.

In The Forgotten, Incas' Fabric Shields gave +10% more movement speed to the Eagle Warrior and their unique units (Kamayuk and Slinger). Incan Eagle Warriors were arguably the worst of the three since the only buff they received was a little speed, but this speed bonus could be very helpful when an Incan player tries to raid a town or tries to perform hit-and-run tactics. This was changed in The African Kingdoms, where Fabric Shields gives extra armor (+1/+2) to the Eagle Warrior and their two unique units. With Fabric Shields in The African Kingdoms, Eagle Warriors are as resistant against arrow fire as Huskarls, making them even better against archers. Incan Eagle Warriors are usually paired with both Kamayuks and Slingers to counter cavalry and infantry, respectively.

The Mayan unique technology El Dorado provides +40 hit points, making them more durable and therefore valuable in pitched battles. Pairing them with Plumed Archers works well since the Plumed Archer is a counter for infantry units that can put the Eagle Warrior in danger. Also, the Plumed Archer sits in a similar speed tier, meaning the two units work very well together.

The Eagle line, with the Elite Eagle Warrior on the right

A group of Elite Eagle Warriors in The Conquerors 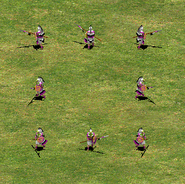 A group of Elite Eagle Warriors in The Forgotten 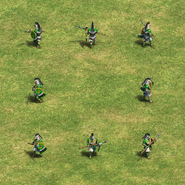 A group of Elite Eagle Warriors in the Definitive Edition