Age of Empires Series Wiki
Register
Don't have an account?
Sign In
Advertisement
in: Age of Empires III, British, Black family,
and 2 more

Pirates! (mentioned only)
A Pirate's Help

Jennifer Hale (English)
Isabel Fernández Avanthay (Spanish)
Elisabet Ramsey, also known as Lizzie the Pirate, is a buccaneer from the Caribbean colonies, beginning as an antagonist in the first Age of Empires III campaign, only to join the player's side later as its deuteragonist.

Initially, she is an enemy of Morgan Black and the Knights of St. John. When she later encounters Morgan they form an alliance, after he performs several heroic acts to impress her and promises her a fortune in Spanish gold.

Although Lizzie leaves at the end of the first act it is later suggested that she and Morgan became lovers. This union was the basis for the following acts, which all involve descendants of Morgan, and thus supposedly Lizzie herself. Amelia Black does not know for certain if she is her great-great-grandmother, though many people say she has a pirate's temper.

Lizzie fights with twin pistols and can use Crackshot Attack with a much shorter cooldown than the one used by Explorers, making up for her lower damage than a Veteran Crossbowman.

Like other heroes, Lizzie has many hit points, but if she falls, she will collapse instead of dying and need to regenerate enough hit points to be rescued by allies. She can collect treasures, but unlike Explorers, cannot build Trading Posts and Town Centers.

Lizzie also grants access to Lizzie's Flagship in Spanish Treasure Fleet and The Fountain of Youth?.

Crackshot Attack: Lizzie fires a single shot that does 5000 ranged damage to the target enemy infantry or cavalry. 30 seconds cooldown. 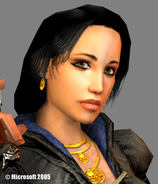 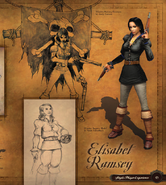