Elephant Archers have high HP and pierce armor, and deal the same amount of damage as Cavalry Archers, but with a lower Rate of Fire. Like all Elephants, Elephant Archers move quite slowly, even more so than foot archers, but they are still faster than War Elephants.

Elephant Archers have more HP than any other Archer in the game, including the War Wagon. They pack the durability of a War Elephant into a powerful package with the range and attack of a Cavalry Archer. Their extremely high HP and pierce armor makes the Elephant Archer function much like a mobile tower with the advantage that they can be healed by Monks.

Because of their high pierce armor, they are also good as an anti-archer unit. However, as elephants they are extremely vulnerable to Pikemen. Unlike most other archers, they are quite good at destroying buildings.

Even though Elephant Archers fare far better against enemy Monks than Persian War Elephants do due to their range, they still struggle against Monks. Like the Persians, the Indians also lack Heresy, a circumstance that furthers that issue.

While Elephant Archers might look strong at first glance, they are a highly situational and rarely used unit (in one on one games). This has three main reasons:

As Elephant Archers are unique to the Indians, only technologies that are available to them are shown in the following table: 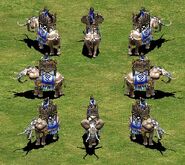 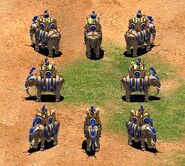 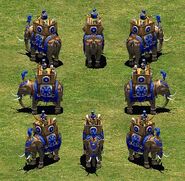 Retrieved from "https://ageofempires.fandom.com/wiki/Elephant_Archer_(Age_of_Empires_II)?oldid=258293"
Community content is available under CC-BY-SA unless otherwise noted.