The Elephant Archer is a ranged cavalry unit in Age of Empires that can be trained at the Archery Range once the Iron Age is reached. It is by far the strongest and most durable cavalry archer type in the game. It combines the hit points of the War Elephant and the attack strength and range of the Composite Bowman.

The Elephant Archer is used for brute strength and durability. It is a slow unit but can take siege fire better than any archer and when in large groups they are very dangerous. They do however cost a lot of food, and can drain resources quickly if too many are built at once. Another disadvantage is because of their slow speed they are extremely susceptible to conversion from Priests and the Elephant Archer's attack is not nearly as good as the Horse Archer's or Heavy Horse Archer's.

It is good to use this unit very sparingly, mostly substituted by faster units which are cheaper and have a better attack, e.g. Horse Archers. The Phoenicians provide cheaper Elephant Archers. Persian Elephant Archers are a bit faster, but lack 2 range and the difference in speed is minimal compared to the Horse Archer anyway. They are practical in some cases, especially if used for defensive purposes, but for the most part their high cost is a major downside and they can be ineffective in many situations. If resources allow it and the opponent isn't using Priests or Centurions then Elephant Archers are good as a backup unit. 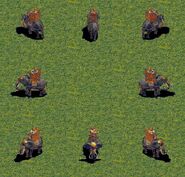 A group of Elephant Archers

An Elephant Archer in the Definitive Edition
Add a photo to this gallery
Retrieved from "https://ageofempires.fandom.com/wiki/Elephant_Archer_(Age_of_Empires)?oldid=252010"
Community content is available under CC-BY-SA unless otherwise noted.