Age of Empires Series Wiki
Register
Don't have an account?
Sign In
Advertisement
in: Huntables, The African Kingdoms, The Asian Dynasties,
and 7 more

5
Elephants provide far more food than any animal, but they also fight back (unlike Gazelles) and are difficult to take down by hunters due to high number of hit points. Having access to a herd is useful when the player needs a quick food boost, although fishing will give an equal amount faster but with no (or less) danger. At least five Villagers should be used when attacking Elephants; any less will likely result in one or more being killed. Alternatively, since Elephants move slowly, Villagers (or Archers) can use hit-and-run tactics to wear them down.

The Elephant's tendency to charge at attackers can also be used to the player's advantage, luring it closer to a Town Center or Storage Pit so more of their food can be harvested before spoiling. Elephants do not attack unless first provoked, unlike the more aggressive Lion and Alligator, so the player can safely move Villagers or other units through packs of elephants so long as they don't injure them.

The Elephant as it appears in the Definitive Edition

An Elephant in the Definitive Edition

5-10
The Elephant is introduced in The African Kingdoms as a huntable animal. Found mainly in maps set in Africa and India, it behaves similarly to the Wild Boar, attacking any unit which provokes it. It is quite fast and deals a large amount of melee damage, so it is recommended to hunt it with a substantial group of Villagers. It gives even more food than the Wild Boar, at 400 instead of 300, which makes it, along with the Rhinoceros, the most valuable wildlife food source in Age of Empires II. 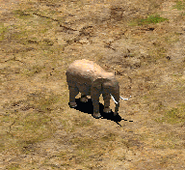 An Elephant in the HD version.

10+
Like in the other games, the Elephant is a huntable source of Food, appearing on various desert and savannah themed maps, including Megalopolis, Nomad, River Nile, Savannah and Watering Hole. Since Elephants will fight back if hunted and are capable of easily killing Villagers, it is advisable for players to hunt Elephants with a group of civilian units.

The Elephant in Age of Mythology has the most Hit Points out of all the huntable animals in the game by far; having twice as many as the animal with the second largest amount, the Rhinoceros. Elephants are also worth 50% more Food that can be gathered, so they are usually worth the risk.

In Tale of the Dragon, Indian Elephants make an appearance on the Basin and Deep Jungle maps. These Elephants are slightly smaller, have proportionally smaller ears and are colored a slightly different hue. These differences are purely cosmetic; their stats are identical to their African counterparts and they are also named "Elephant" in-game. 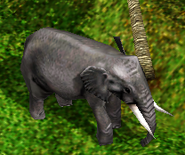 Like the Elephants in previous games, Wild Elephants[sic] are huntable animals but they do not fight back and are completely harmless.

They can be found on some Asian Maps (including Indochina, Deccan, Borneo, and Ceylon). The length of the elephant tusks varies with some being very long while others are unnoticeable. 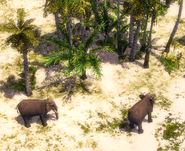 1.5
In Age of Empires III: Definitive Edition - The African Royals, Elephant Guardians are the largest land animal Treasure Guardian with similar stats to the Rhinoceros. They can be found in various African maps.

Aiz the Tame Elephant is the strongest of all pet animals, having the most hit points and attack.