Rodrigo Díaz de Vivar, known as El Cid or El Cid Campeador (1040s – July 10, 1099), was a Castilian Knight and warlord in Medieval Spain. He reclaimed the city of Valencia from Moorish control for a brief period during the Reconquista. After his death, El Cid was mythologized into an embodiment of Honor and Chivalry, similar to King Arthur, Charlemagne, or Saladin. This legendary version from epics like the 12th century Cantar de Mío Cid is the basis of the El Cid campaign in Age of Empires II: The Conquerors, rather than El Cid's historical career proper.

5
In Age of Empires II: The Age of Kings, El Cid appears as an infantry hero in the Scenario Editor with the image of a Champion. As a hero, he cannot be converted and regenerates health at a rate of 0.5 HP per second (since The Conquerors). In The Age of Kings, El Cid has the Champion's icon but in The Conquerors he receives a face portrait shared with Erik the Red and Harald Hardraade.

El Cid appears briefly in the beginning of the first and third scenarios of the El Cid campaign in The Conquerors. In both cases, El Cid is substitued by a mounted knight with a lance (similar to other campaign-only hero units), El Cid Campeador, after he comes near his horse, Babieca. Both El Cid and El Cid Campeador are key, must-survive units in the campaign.

The El Cid campaign consists of 6 scenarios. The player plays as the Spanish or Saracens, and the player color is red.

The campaign's story is narrated by El Cid's widow and successor as ruler of Valencia, Jimena of Asturias, a short time after his death. 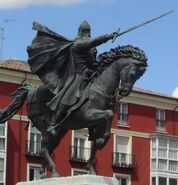 The statue of El Cid in Burgos, Castile's historical capital. 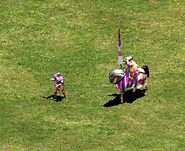 El Cid (on the left) and his mounted variant 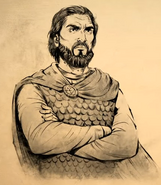 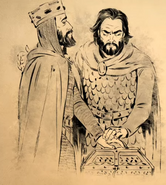 King Alfonso made to swear on the relics by El Cid 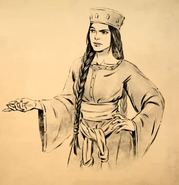 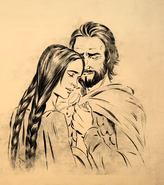 Reunited after his exile 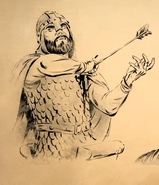 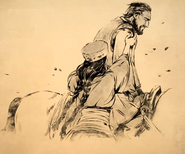 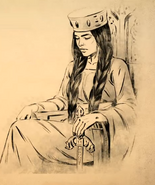