Age of Empires Series Wiki
Register
Don't have an account?
Sign In
Advertisement
in: Articles needing an image, Historical Maps, Age of Empires III, Knights of the Mediterranean

Eighty Years' War is a historical map released with Age of Empires III: Definitive Edition - Knights of the Mediterranean.

The Defender players must contain everyone else on a fortified peninsula defending the fort, the rest must attack! The trade route, command posts, and headquarters offer unique upgrades.

Defend or destroy the fort's headquarters.

Map of the Seventeen Provinces, 1581 secession outlined in red. 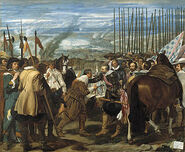 "The Surrender of Breda" by Diego Velázquez. Oil on canvas, 1635.
Community content is available under CC-BY-SA unless otherwise noted.
Advertisement