Edward Longshanks is a campaign in Age of Empires II: Definitive Edition - Lords of the West, based on the exploits of Edward I of England (17/18 June 1239 – 7 July 1307), also known as Edward Longshanks and the Hammer of the Scots (Latin: Malleus Scotorum). He was an English King who lead a shattered England to new heights of prestige and fortitude.

Edward I was a tall man for his era, at 6 ft 2 in (1.88 m), hence the nickname "Longshanks". He was temperamental, and this, along with his height, made him an intimidating man, and he often instilled fear in his contemporaries.

6
Edward Longshanks is a cavalry hero available only in the Scenario Editor in Age of Empires II: Definitive Edition.

Like all hero units, it is immune to conversion and regenerates health.

The Edward Longshanks campaign consists of 5 scenarios. The player plays as the Britons, and the player color is red.

The campaign is narrated by the son and successor of Longshanks, Edward II of England.

Portrait in Westminster Abbey, thought to be of Edward I 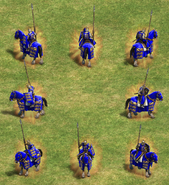 Edward Longshanks views in Lords of the West