4
The Eastern Swordsman in an untrainable infantry unit in Age of Empires II HD: The Forgotten. It appears in several campaign scenarios and is also available in the Scenario Editor.

The Eastern Swordsman has exactly the same stats as the Nordic Swordsman and only differs from the regular Long Swordsman by lacking the attack bonus against buildings.

Two notable appearances are in Ruins of Empires and Estado da India, the third and fourth scenarios in the Francisco de Almeida campaign, respectively. 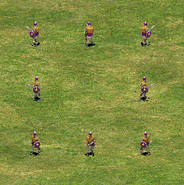 A group of Eastern Swordsmen
Add a photo to this gallery

Retrieved from "https://ageofempires.fandom.com/wiki/Eastern_Swordsman?oldid=274687"
Community content is available under CC-BY-SA unless otherwise noted.