800
The Earthen Wall is a Chinese Archaic Age wall in Age of Mythology: Tale of the Dragon. Earthen Walls can be upgraded to Stone Walls in the Classical Age.

Earthen Walls can be upgraded to Stone Walls in the Classical Age. The upgrade costs 200 food and 200 gold. The research time is 40 seconds. Stone Walls have 400 hit points and 5 Line of Sight more than Earthen Walls.

"The first and most persistent barriers against opponents throughout history have been earthen ramparts. Rammed-earth walls first appear in China in the Neolithic period, ca. 5000 BC, and its virtues as a fireproof, quake-resistant building material with good insulating capabilities made earthen walls an excellent choice of building material for both civilian and military applications.

The Yellow Emperor Huang Di is credited with building the very first city wall. During the Shang dynasty walls might ascend to a height of 20 meters, or 65 feet, as found at the city of Ao (1400 BC). The city of Handan in the state of Zhou (386 BC) had walls of similar dimensions, showing how city walls and layouts only became more uniform as Imperial China grew and consolidated its power.

At the "Long Wall," the series of fortifications built by the Warring States to defend their own borders, walls were constructed by ramming earth and gravel between wooden boards. They could withstand typical attacks from troops wielding small-arms, but would be ineffective against later siege engines and protracted siege warfare. After consolidating his new empire, in 221 BC the Emperor Zheng of Qin demolished the parts of the Long Wall which divided his states, and restored, combined, and expanded what remained in the north into the Great Wall of China."
—In-game help section 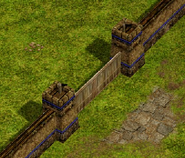 An Earthen Gate
Add a photo to this gallery
Retrieved from "https://ageofempires.fandom.com/wiki/Earthen_Wall?oldid=232312"
Community content is available under CC-BY-SA unless otherwise noted.