Age of Empires Series Wiki
Register
Don't have an account?
Sign In
Advertisement
in: Chinese god powers, Age of Mythology, Tale of the Dragon,
and 6 more

Earth Dragon is a Chinese Mythic Age god power in Age of Mythology: Tale of the Dragon that is available to worshipers of Xi Wangmu. When cast, an Earth Dragon emerges from the Earth's crust to attack enemies within its range. The Earth Dragon has the highest number of hit points of any unit bar the Titan, a title previously held by Nidhogg, the Norse dragon.

Earth Dragon can be cast three times in a game, but has a cooldown of two minutes.

It is not recommended to use Earth Dragon defensively as it is a stationary unit, similar to the Atlantean Carnivora, and can be overtaken by ranged units or avoided altogether by simply keeping distance from it. Instead, it should be cast within an important enemy town so that it can attack both enemy units and buildings. The Earth Dragon has enough bulk to take out a Town Center even when taking damage from nearby towers and Castle-type buildings. The Dragon's fire breath deals splash damage, meaning it can damage several targets at once. The player should not hesitate to summon the Earth Dragon in an area where it will take lots of damage as it will return underground after three minutes anyway. Since Earth Dragon can be used three times, it is an efficient means to deal tremendous damage to multiple enemy towns.

24
The Earth Dragon is an immobile myth unit with a similar appearance to the Azure Dragon. Their normal attack does Area of Effect damage and has maximum range of 6 meters, with the Area of Effect being four meters.

The Earth Dragon Dilong appears in the Trapped scenario of the Tale of the Dragon campaign where he is summoned by Zhi to lead Jiao-Long and Shun to the underworld. He can then be summoned in the following scenario, Confrontation, to help defeat Danzhu's army of 200 men. 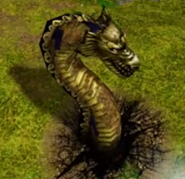 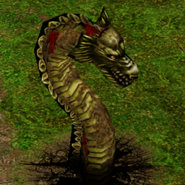 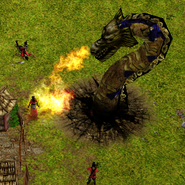