Age of Empires Series Wiki
Register
Don't have an account?
Sign In
Advertisement
in: Article stubs, Age of Empires III, Infantry,
and 3 more

The Eagle Scout is a scout unit in Age of Empires III: Definitive Edition added by update 9476 that is unique to the Aztecs and can be trained by the Aztec War Chief. Aztec players start with an Eagle Scout alongside their War Chief.

The Eagle Scout is automatically upgraded in the Fortress Age and in the Industrial Age. 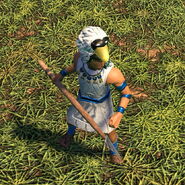