Creates a Gold Mine
Dwarven Mine is a Norse Archaic Age god power in Age of Mythology that is available to worshipers of Thor. When cast, it creates a Gold Mine at the location specified by the player.

The amount of gold held by the Mine differs according to the Age it is cast in.

Because of the much higher gold yield in later Ages, it may be better in some games to keep this power until later Ages are reached and most Gold Mines are gone, but it can also be helpful to get an economic edge in the early game.

It is recommended to cast Dwarven Mine near a Town Center (the Norse use Ox Carts so otherwise it can be placed in an open area) or, if playing a team game, near a gathering building of an ally than needs gold quickly. 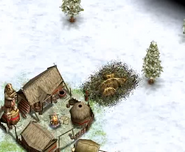 Dwarven Mine if cast in the Archaic Age

Animation of a Gold Mine rising in the Heroic Age.
Community content is available under CC-BY-SA unless otherwise noted.
Advertisement