Age of Empires Series Wiki
Register
Don't have an account?
Sign In
Advertisement
in: Age of Mythology, Tale of the Dragon, Myth units,
and 4 more

2 feet
The Dragon Turtle is a Mythic Age naval myth unit in Age of Mythology: Tale of the Dragon. It is available to the worshipers of Ao Kuang.

Spits a single fireball from its mouth over a range of 14 meters that deals Area of Effect damage. Damage: 100 Hack, 50 Crush. Area: 6 meters. Recharge: 13 seconds.

As it also has less armor and uses up more population than the Azure Dragon, the Dragon Turtle may appear less practical to use than its amphibious counterpart. However, its special attack allows it to attack units close to the shore in intervals and slightly makes up for its restriction to water. The fireball also enables it to strike an incoming enemy before it can close in to attack. Dragon Turtles also cost food instead of gold (which becomes scarce by the Mythic Age) and require less Favor to train. They also have more hit points, move slightly faster, and deal a large amount of crush damage, allowing them to destroy buildings much faster.

The Dragon Turtle's main purpose is to maintain or regain control of the water on maps such as River Nile or River Styx. It can sink each type of ship one on one and is a valuable addition to the player's navy. They should be in turn protected from other naval Myth Units (aside from the War Turtle and Leviathan) and especially from heroes such as the Argo and Son of Osiris who will defeat it one on one.

The Dragon Turtle is a mythological creature whose appearance resembles both the Azure Dragon of the East and the Black Turtle of the South, as it bears the head of the former and the body of the latter.

Ancient cultures believed the Dragon Turtle was a symbol of prosperity and longevity, but also symbolized courage and determination, which can be attributed to its fierce-looking appearance and rock-hard shell. 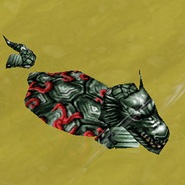