6
The Dragon Ship is an untrainable warship in Age of Empires II HD: The Forgotten. It can be found in the Scenario Editor.

It shoots a constant stream of fire, similar to the Fire Ship.

A very notable appearance of Dragon Ships is in The Mandalay Cobra, where they can be found alongside Canoes, Sunda Royal Fighters, and Monks to the eastern side of a river. Another one is in the Langshan Jiang scenario, as part of quest involving them. 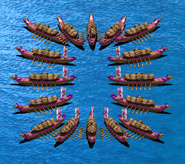 A group of Dragon Ships
Add a photo to this gallery

Retrieved from "https://ageofempires.fandom.com/wiki/Dragon_Ship_(Age_of_Empires_II)?oldid=313125"
Community content is available under CC-BY-SA unless otherwise noted.