Age of Empires Series Wiki
Register
Don't have an account?
Sign In
Advertisement
in: Age of Empires II, Dracula, Heavy cavalry,
and 2 more

The Dracula campaign in the Age of Empires II HD: The Forgotten is depicting its namesake, Vlad III Dracula (1428/31–1476/77). Vlad III Dracula (Vlad Drăculea), from the House of Drăculești (a branch of the House of Basarab), was a three-time Voivode of Wallachia, first in 1448, then in 1456 to 1462, and once more in 1476. He first came into power by fighting Vladislav II the usurper from the House of Dănești (another branch of the Basarab), later frequently fighting the Ottoman Empire. Due to his reputation of impaling his enemies, he is also known as "Vlad the Impaler" or Vlad Țepeș in Romanian.

In the third scenario, Dracula nabs a Trade Cart on the way to Giurgiu. He then disguises himself as a King (named Disguised Vlad Dracula) and freely enters the city as a trader to later capture the city and defeat the Ottoman guards. After that, Dracula is reverted to his original form.

The Dracula campaign consists of 5 scenarios. Since there is no civilization that Dracula perfectly fits in, the player plays with three different civilizations: Turks, Magyars, and Slavs; and the player color is red.

In the Definitive Edition, some scenarios have been slightly reworked. For example, The Breath of the Dragon scenario involves a more direct assault to the Turkish stronghold in the captured Wallachian city rather than a stealth mission.

The campaign is narrated by an unnamed traveler whose companions take shelter in Poenari Castle (Dracula's former home) during a storm, where an old veteran from Dracula's wars against the Ottomans relates the story to them. 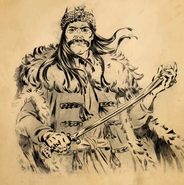 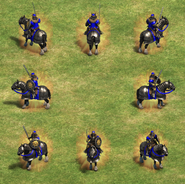 Vlad Dracula in the Definitive Edition
Community content is available under CC-BY-SA unless otherwise noted.
Advertisement