The Doppelsoldner (correct German: Doppelsöldner; both singular and plural) is a melee heavy infantry in Age of Empires III that is unique to the Germans and can be trained at Barracks, Fort, and Galleon. It is a swordsman whose large sword causes area damage in each sweep.

The Doppelsoldner's potential is incredible. Doppelsoldners wield great two-handed swords, "Zweihänder" (German for 'two-handed sword), dealing area damage. They are good against most hand infantry, light infantry (such as Coyote Runners), buildings, and cavalry, but are vulnerable to artillery and ranged infantry. Doppelsoldners have high siege damage and can destroy buildings within seconds in large numbers.

They cost roughly the same as a Hussar, so they can be difficult to mass early, unless proper investments are made into economy. They are quite powerful for a Colonial Age unit, but are vulnerable to ranged infantry. Combining them with Uhlans and Crossbowmen can make for an effective early composition. They become less useful after the Colonial Age, but cam be used as a meatshield against cavalry or for sieging down enemy buildings.

As Doppelsoldners are unique to the Germans, only technologies that they have access are shown in the following table:

As Doppelsoldners are unique to the Germans, only their cards and other civilizations' TEAM cards are shown in the following tables:

"Doppelsoldners were a group of specialized Landsknechts, whose role was to charge lines of pike and halberds. They were actually mercenaries that fought under Maximilian II. They were armed with halberds, arquebuses, and long two-handed swords (zweihanders). They stood in the front ranks and earned double the normal pay (and their name) from the privilege of breaking up ranks of pike.

Dress in this era was flamboyant, and Doppelsoldners are depicted with striped leggings, puffy sleeves (for mobility), large or elaborately plumed hats, and richly slashed and decorated uniforms." 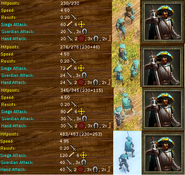 Doppelsoldner through Colonial Age to Imperial Age with only Barracks upgrades, and fully upgraded Imperial Age (except Tilly's Discipline)

The Doppelsoldner's history portrait
Add a photo to this gallery
Retrieved from "https://ageofempires.fandom.com/wiki/Doppelsoldner?oldid=262963"
Community content is available under CC-BY-SA unless otherwise noted.