6
The Donkey is an untrainable unit in Age of Empires II HD: The Forgotten available in the Scenario Editor. Donkeys can be used to gain gold by traveling to another player's Market and back, just like a regular Trade Cart. Compared to the standard Trade Cart, they move much slower, but they carry more gold than listed at the respective Market. Their speed can be improved by researching Caravan. 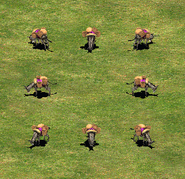 A group of Donkeys.

Walking sprite of the unit.
Community content is available under CC-BY-SA unless otherwise noted.
Advertisement