Age of Empires Series Wiki
Register
Don't have an account?
Sign In
Advertisement
in: Age of Empires II, Lords of the West, Towers

The Donjon is a military building and defensive structure in Age of Empires II: Definitive Edition - Lords of the West that is unique to the Sicilians. It can be built from the Feudal Age and replaces the tower line in the Sicilian tech tree. Like the Castle, it can be used to train Serjeants and garrison units for protection. It can be built and repaired by both Villagers and Serjeants[note 1]. This building is based on the Donjon of Adrano in Sicily.

Donjons cost 175 stone and 75 wood, significantly more than the 125 stone and 50 wood for the Watch Tower line. It has the same damage (including bonus damage types) for the main and extra projectiles as Watch Towers. However, it gains one extra arrow in each age after Feudal, firing two arrows in the Castle and three in the Imperial Age with no units garrisoned, as opposed to the Watch Tower's one. It is also larger than the Watch Tower, taking up four tiles as opposed to one. The larger size allows the Donjon to be built and repaired faster in some scenarios, since more units can work on it at the same time. However, the larger size also allows more melee units to attack simultaneously compared to a Watch Tower. The Donjon can garrison ten units as opposed to five for the Watch Tower, increasing its damage output if garrisoned by Villagers or archers. They can garrison more units than Towers, but the number of maximum extra arrows Donjons can get from garrisoned units in Feudal Age is 4 (the same as Towers). Like towers, they heal garrisoned units at 6 HP per minute, or 36 after Herbal Medicine.

Unlike the Watch Tower line, which must be upgraded in the Castle Age and Imperial Age at the University to Guard Towers and Keeps, respectively, the Donjon instantly gains more hit points for free upon advancing to the next age, going from 1,250 hit points in the Feudal Age to 1,500 in the Castle Age and then 2,250 in the Imperial Age. Also, unlike towers, Donjons receive +1/+1 armor upon reaching the next age (towers receive additional armor with the Guard Tower and Keep upgrades). The Donjon receives +3 attack from Arrowslits, the same as a Keep, and benefits from Chemistry and Heated Shot. Also, the limit of additional arrows from garrisoned archers or Villagers raises to a total of 7 extra arrows (plus main projectile), and in the Imperial Age to a total of 11 extra arrows (plus main projectile).

Unlike Towers, Donjons are also able to train the Sicilian unique unit the Serjeant, which is an infantry unit that can build Donjons. One possible strategy involving Donjons and Serjeants consists of accumulating stone in the Dark and Feudal Age, then take some Villagers for creating the first Donjon near an opponent. Train Serjeants1, that will continue the job of creating more Donjons around the opponent in a similar fashion to a Tower rush (however, since Donjons are more expensive than Towers, those must be preferably placed near important resources for the opponent). A fully upgraded Keep is superior in hit points and base attack to Donjons without garrisoned units inside, but Donjons with garrisoned archers can quickly defeat a generic fully upgraded Keep (and this not taking in consideration its ability to train Serjeants), as it can fire up to 11 secondary arrows (generic Keeps only fire up to 4 secondary arrows), all of which have +5 attack vs. stone defenses. Another advantage Donjons have over towers is that they do not need to be upgraded; however, the outcome in some circumstances is similar considering the higher cost of the Donjon.

Defensively speaking, Donjons should be considered as a type of tower and should be placed on choke points or behind an obstacle (like Forests, Walls or cliffs) in order to maximize their defensive capabilities. Donjons are relatively weak against tower rushes, as a single Donjon requires a large percentage of the stone bank available to the player at the start of the game. This allows the opponent to delete the initial tower and rebuild it elsewhere uncontested. The Sicilian player should place their Donjon in a wise way since the Donjon is costly. The two advantages of a Donjon against a tower rush is +400 HP (in the Feudal Age) and the ability to train Serjeants, while the damage and garrison abilities are the same as a Watch Tower (in the Feudal Age); also, the Donjon takes 10 more seconds to be constructed (90 seconds vs 80 seconds for a Watch Tower). Converted Donjons cannot produce Serjeants (unless the converting player is also Sicilian, which is impossible in most cases, since Sicilians do not have Redemption).

As Donjons are unique to the Sicilians, only technologies that are available to them are shown in the following table: 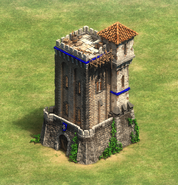