Age of Empires Series Wiki
Register
Don't have an account?
Sign In
Advertisement
in: Age of Empires II, The Forgotten, Marine creatures

In the HD version, they are provided in the Scenario Editor, as animals that can be fished, yielding 350 food, as with the Marlin. 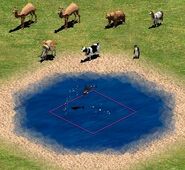 The Dolphin is featured among other animals introduced in The Forgotten

A Dolphin, as featured in the alpha version of Age of Empires II
Community content is available under CC-BY-SA unless otherwise noted.
Advertisement