"Generates armies automatically. Configure it to produce different things. Can only be sent from the Home City."
—In-game description

The Dojo is a military building in The Asian Dynasties that is unique to the Japanese and can only be built by Dojo Rickshaw shipped from the Home City. It automatically trains a group of Japanese infantry or cavalry of the player's choice at no cost.

As Dojo are unique to the Japanese, only technologies that they have access to are shown in the following table:

As Dojo are unique to the Japanese, only their cards and other civilizations' TEAM cards are shown in the following tables:

"In Japan, the dojo serves as much more than a training facility for martial artists. A dojo is any formal training facility where members learn and practice physical skills and art forms, specifically the “do” forms. The Japanese suffix “do” means the way of, and often implies that the technique in question possesses a spiritual element. Since the Meiji era (1868 to 1912), Japanese martial artists have adopted this suffix for the names of martial arts, such as Aikido, Judo, and Kendo.

In Japanese culture, the dojo is a symbolically important structure. Training is usually conducted outside the building on the grounds, while the interior is used for more ritualistic observations, and as a display for artifacts and weapons associated with the dojo and its members. The dojo is cared for and maintained by its students, who at the end of every each training session perform a ritual “souji,” or cleaning. The importance of rank pervades every aspect of dojo life; there are even separate entrances to the building, one for the teachers, and one for the students." 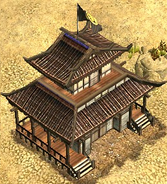 An in-game Dojo
Add a photo to this gallery
Retrieved from "https://ageofempires.fandom.com/wiki/Dojo?oldid=258854"
Community content is available under CC-BY-SA unless otherwise noted.