1600
The Dock is a building in Age of Mythology. It is where all ships are built, that is warships, transports, and Fishing Ships. It also acts as a food drop-off point for fishing ships – and as a harbor, since they can garrison there at any time.

As with other buildings, Docks are built by Workers and Norse infantry; additionally, Egyptian fishing ships can build them, albeit slowly. The Dock is available to all civilizations.

In The Titans, Docks have a ranged attack that activates when Fishing Ships are garrisoned inside. With no Armory upgrades, the damage scales from 9 (1 Fishing Ship garrisoned) to 16 (10 Fishing Ships garrisoned). It can only target enemy warships, Transport Ships and naval myth units. Prior to Patch 2.7, it was not able to attack the Dragon Turtle and the two amphibious units, the War Salamander and the Azure Dragon, due to a bug.

Long before written history begins, humans were building boats and venturing out onto the seas to trade and fish. Boat building became an important skill for civilizations that had access to the sea for commerce and food gathering. Boat building was usually centered at waterside workshops in sheltered harbors. Here also the fishing boats would unload their catch. 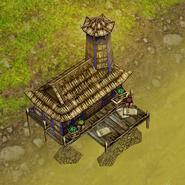 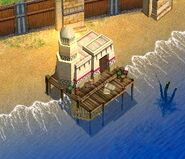 An Egyptian Dock in the Mythic Age
Community content is available under CC-BY-SA unless otherwise noted.
Advertisement