Anti-ship attack only available when garrisoned by Fishing Boats

The Dock is an economic/military building in Age of Empires III. It trains ships, provide ship improvements, and repair nearby ships.

The Dock's ship repair ability works similarly to the Field Hospital for land units. However, the Dock will only repair a single ship at a time and ships with high hit points (e.g. Frigate) will obviously take longer.

Up to 20 Fishing Boats can garrison in each Dock to grant it a ranged attack and shelter from attacks. However, like the Town Center, only the first ten Fishing Boats affect the damage.

The African civilizations build the Port, which is identical in function with the Dock.

The "Advanced Dock" Home City Card, available to all civilizations, doubles the healing effect and attack of Docks.

Note: The attack animation appears to be a rifle shot, thus ranged damage, however it is actually siege damage that ignores a ships ranged resistance.

The total attack of a Dock are calculated on the following formula:

Where A is the total attack, B is the Dock base attack, and G is the number of Fishing Boats garrisoned in the Dock.

With 10 Fishing Boats garrisoned, the Advanced Docks card and the Heated Shot improvement, the Dock will have 375 attack, and if the TEAM Coastal Defenses card is sent, it can deal 937.5 damage to ships when it is attacked by one, which is a significant investment that an enemy can merely ignore, or counter with longer range ships (e.g. Frigates or Tlaloc Canoes).

The Haudenosaunee can further boost the damage by +185% via Town Ceremony at the Community Plaza) to 2,671.875 damage. The Aztecs cannot research Heated Shot, but with Warrior Priests at the Plaza, Town Ceremony will increase the damage by +277%, allowing for 1,413.75 damage total. 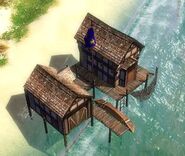 A Dock in the Colonial Age

This in game stats icon reveals the ranged anti-ship attack of a garrisoned Dock. Note that garrisoning more Fishing Boats does not change the attack.