Age of Empires Series Wiki
Register
Don't have an account?
Sign In
Advertisement
in: Age of Empires III, Scouts, Infantry,
and 2 more

Disciples are unusually quick-footed for foot soldiers and take up no population but have a small build limit, which can be exceeded through the conversion of enemy units killed in combat.

The Disciple has a weak melee attack and acts as hand cavalry, being good against skirmishers and artillery but are vulnerable to Heavy Infantry and Ranged Cavalry. Disciples are treated by the game in the same way as Coyote Runners, so light cavalry units have large multipliers against them.

The Disciple can be upgraded at the Monastery, increasing his hit points and attack. The White Pagoda Wonder increase Disciples' hit points, attack and build limit.

Critical Strike (passive): Gives the Disciple a 10% chance to do double damage when attacking.

The Disciple is automatically upgraded at every Age up.

As Disciples are unique to the Chinese, only technologies that they have access to are shown in the following table:

As Disciples are unique to the Chinese, only their cards and other civilizations' TEAM cards are shown in the following tables:

The Shaolin Master, accompagnied by some of his Disciples. 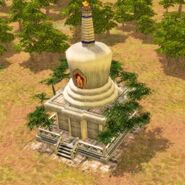 The White Pagoda, the Wonder that is obligatory for Disciple rushes.
Community content is available under CC-BY-SA unless otherwise noted.
Advertisement