Age of Empires Series Wiki
Register
Don't have an account?
Sign In
Advertisement
in: Atlantean units, Heroic Age, Age of Mythology,
and 2 more

16 feet
The Destroyer is a counter-building infantry unit available to the Atlanteans in the Heroic Age.

With their high Pierce Armor and good Hack Armor, Destroyers can make their way through whatever units are in their way, to seek out and destroy fortifications with ease. They are an important unit for the Atlanteans in the Heroic Age as they are the only siege unit available unless the player has worshiped Rheia.

In addition to their ability to destroy buildings they can act as a soft counter to most ranged units, due to their high pierce armor and can hold their own against cavalry. Their main flaw is they are slow, moving at about the same speed of most Siege units. Also, most infantry units can defeat them and they are somewhat expensive. They are especially vulnerable to ranged units that deal hack damage, such as Throwing Axemen or Fire Giants, and melee counter-infantry.

Concept Art of the Destroyer, resembles a hybrid of a Roman Legionary and Mycenaean Heavy Infantry

Destroyer Hero (left) and Champion Destroyer (right). Notice that the Hero version is surrounded with a glow like other Heroes. 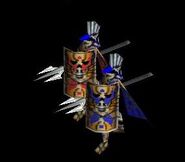 Destroyer in mod
Community content is available under CC-BY-SA unless otherwise noted.
Advertisement