Age of Empires Series Wiki
Register
Don't have an account?
Sign In
Advertisement
in: Age of Empires III, Foes, Gunpowder infantry,
and 2 more

Temples of the Aztec

Benito Martinez
Francisco Juan Delgado de León was a Spanish conquistador and a foe of Morgan Black in Age of Empires III.

Delgado went on to search for the fabled Fountain of Youth to claim it for his nation. His army fought an Aztec city for its control, but was stopped by Black and the Knights of St. John and even countered by them and lost a fort nearby that city. The Conquistador captured the Ottoman leader Sahin, who attempted to force him to reveal the Fountain's location, but failed. Delgado's final loss was the destruction of his colony and the capture of six treasure fleets at the hands of Black's troops, forcing him to halt his search.

Delgado fights with his sword much like a Rodelero, and does a whopping 500 melee damage, allowing him to make short work of most units and weaker buildings due to his 200 siege damage. Surprisingly, he only has a 10% resistance against melee attacks.

Delgado has many hit points, but unlike other heroes, he will die instead of collapsing when he falls. He can collect Treasures, but unlike Explorers, cannot build Trading Posts and Town Centers, and has no special abilities. 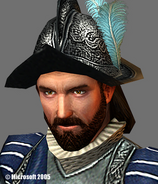