Age of Empires Series Wiki
Register
Don't have an account?
Sign In
Advertisement
in: Age of Empires III, Maps, The Asian Dynasties

Deccan is a map in Age of Empires III: The Asian Dynasties based on the Indian subcontinent. The player will start out with resources, even before the Town Center is built.

There is a river that divides the map in half, and there are certain places where the river may be swampy, and therefore can be walked through, but, unlike the Bayou map, not all of it is a swamp, so walls can be built at those points. Water Buffaloes will be scattered around the plateau in groups of one or two and can be tamed for food as livestock or tasked to Sacred Fields or Shrines.

Two native settlements are found on the central plain of the map (plateau during team matches). Three different types of native religious settlements can be found: the Bhakti Temple, the Udasi Temple, and the Sufi Mosque.

A large forest located on the central plateau

Wild Elephants along the river bank 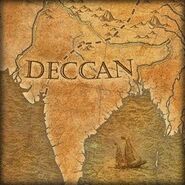 Deccan from the map selection menu
Community content is available under CC-BY-SA unless otherwise noted.
Advertisement