Age of Empires Series Wiki
Register
Don't have an account?
Sign In
Advertisement
in: Age of Mythology, Tale of the Dragon, Foes, Chinese heroes

Danzhu can regenerate 1.5 HP per second. Danzhu cannot be killed: if his HP reaches 1, he merely faints and can be resuscitated if approached by allied units.

Mysterious forces have upset the balance of Yin and Yang, and Emperor Yao's subjects are being harmed by natural disasters (such as floods and volcanic eruptions) and monsters. To investigate these disturbances, the Emperor sent his finest general, Jiao-Long and his son, prince Danzhu, to investigate and resolve the chaos.

After Jiao-Long, Shun and Zhi help the Vermilion Bird, Danzhu spies on them and prepares for another attack, but again, his army is no match for Jiao-Long's forces. After Jiao-Long summons Pangu, Danzhu congratulates Jiao-Long as if he hadn't tried to kill him. Jiao-Long replies with "Your actions have spoken more than your words ever could. Do not expect a favorable report when I return you to the Emperor." 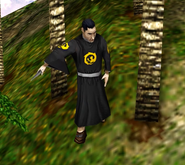 Danzhu spying on Shun and Jiao-Long.
Community content is available under CC-BY-SA unless otherwise noted.
Advertisement