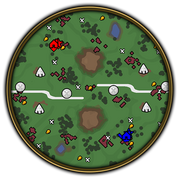 Dakota is one of the new landlocked maps in Age of Empires III: Definitive Edition. It takes place in a grassy region in Northern America.

Resources in Dakota consist of herds of Deer. Two large impassible hills occupy central positions in the map and the two Trade Routes stand between them. There may be either two Comanche or Cree settlements near the east and west ends.