+4 vs Standard building
+4 vs Stone defense

7
Dagnajan is a cavalry archer hero featured in the A Fallen Crown scenario in the Yodit campaign, as well as the Scenario Editor in Age of Empires II HD: The African Kingdoms. Dagnajan is based on an Ethiopian ruler of the Aksum Kingdom of the same name during the middle of the ninth century. His in-game appearance is unique but very similar to an Elephant Archer. As a hero, he cannot be converted and can regenerate health. 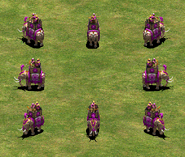 Dagnajan in the Scenario Editor

Dagnajan (right) in comparison to an Elephant Archer. Notice him sitting behind the mahout.
Community content is available under CC-BY-SA unless otherwise noted.