Age of Empires Series Wiki
Register
Don't have an account?
Sign In
Advertisement
in: Article stubs, Age of Empires II, Infantry heroes, Lords of the West

4
Dafydd ap Gruffydd (11 July 1238 – 3 October 1283) is an infantry hero unit in Age of Empires II: Definitive Edition - Lords of the West. He appears as a unique unit wielding a shield and warhammer. As a hero, he cannot be converted and can regenerate health.

Dafydd has the ability to deal extra damage via a charged attack, similar to a Coustillier. 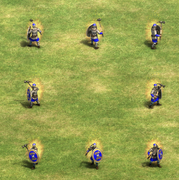