16 feet
The Cyclops is a one-eyed, 12-foot giant who wields a large wooden club to great effect. In Age of Mythology, it is a Greek myth unit available to worshipers of Ares.

Additionally, there are two Cyclops Heroes. First there is Polyphemus, who is Poseidon's terrestrial Mythic Age Hero. The second is Gargarensis, the scheming chief antagonist in the Fall of the Trident campaign. Gargarensis is actually playable in Scenario 16, Good Advice. Like the regular Cyclops, his special attack is a lethal throw.

Throw: the Cyclops picks up a human unit and hurls it, killing the unit, hurting anyone who is in the way and knocking trees over. Recharge time: 15 seconds.

The Cyclops has the most hit points of any Classical Age myth unit and is the most powerful. Its special attack is lethal to any human unit and the throw often causes collateral damage as well. The Cyclops is also excellent against buildings, especially when upgraded to the Elder Cyclops. Despite their slow speed, they are excellent additions to early game raids as their sheer power can be used to destroy important enemy constructions such as Watch Towers or Barracks.

It's best to use Heroes or more powerful myth units to take out a Cyclops. They are particularly susceptible to ranged heroes such as Priests and myth units such as Wadjets who can attack from a distance. Furthermore, Cyclopes are expensive in terms of resources and population so they are hard to mass and even the loss of just one is significant. But if well defended and regularly healed, Cyclopes will continue to be useful as the game progresses. For example, they can protect Siege Weapons by throwing away any stronger late game human units attacking it, including the Egyptian War Elephant and the Chinese General.

Giants with one central eye, the Cyclopes were storm gods in early Greek mythology. In some tales they became smiths and worked with Hephaestus on Zeus' thunderbolts. In other tales there were only three Cyclopes, representing thunder, lightning, and a thunderbolt. In classical Greece, the "lesser cyclopes" were seen as the sons of Poseidon, bestial and violent, who were avoided and feared. There were also wise and powerful "elder Cyclopes" that were the sons of Kronos.

Cyclops about to throw a War Elephant 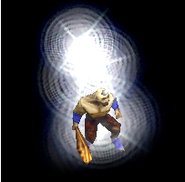 Cyclops appearing in the game's opening.

Pre-release render of a Cyclops with human legs.

Wikipedia has an article about:
Cyclops
Community content is available under CC-BY-SA unless otherwise noted.
Advertisement