Cut content refers to material planned and produced during the development of games in the Age of Empires series, but not appearing in final retail releases.

It is not uncommon for previously unused content to be reused for future updates, or to be reworked into different things.

There are four unused team colors in the game files that are not accessible nor ever seen in normal gameplay: brown, sky blue, gold and pink. It is unknown if these colors were meant to be used in normal gameplay at some point in development, or were simply used for testing.

Many features that were cut from the final game can be found in the Portuguese Civ Mod II for The Conquerors.

Age of Mythology is the first fully 3D game by Ensemble Studios, and was showcased often by ES between June 2001 and October 2002. A multiplayer alpha build was released to selected testers in 2001, containing many files relating to cut content. As such, this game has the most known and documented cut content out of all Ensemble Studios games.

Many technologies from Age of Empires II or based on technologies in that game were slated to appear in Age of Mythology.

There are five unused team colors in the game files that are not accessible nor ever seen in normal gameplay: black, pale green, dark grey, magenta and white for the original game; and black, grey, light grey, gold and white in the Definitive Edition.

Note that the white color appears many times as the last few choices in the Scenario Editor, as if that color is a placeholder. It is unknown if these team colors were meant to be part of normal gameplay at some point in development, if they are simply used for testing. The black team color is used by the Cornwallis units in the The Battle of Yorktown scenario. 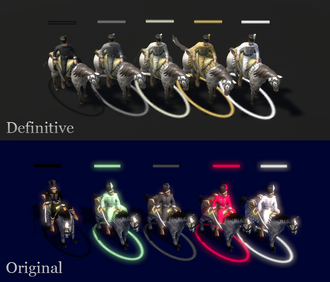