Age of Empires Series Wiki
Register
Don't have an account?
Sign In
Advertisement
in: Article stubs, Age of Empires II, Scouts,
and 2 more

7
Cusi Yupanqui is an infantry hero in Age of Empires II: Definitive Edition. He is seen in The Field of Blood, the second Pachacuti scenario.

The unit, though a unique sprite, is very similar to that of an Eagle Warrior, albeit with a faster attack rate and greater line of sight. Like other heroes, the unit is immune to conversion and can regenerate health. 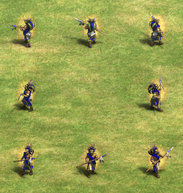 Cusi Yupanqui (c.1418 – 1471), later known as Pachacuti Inca Yupanqui, was the ninth ruler of the Kingdom of Cuzco. Son of Huiracocha Inca, he lead the defense against the invasion of the chankas c.1438 after the former and his chosen sucessor abandoned the kingdom to their fate. Emerging victorious, he inherited the throne. His rule would mark the transformation of the Kingdom of Cuzco into the Inca Empire.