The Culverin is an artillery unit in Age of Empires III that can be trained at the Artillery Foundry once the Fortress Age is reached. It is an artillery piece with exceptional range that is especially effective against other artillery and ships, but does well against buildings as well.

Culverins are available to European and American civilizations except the Knights of St. John (Act I: Blood campaign).

The Culverin is not very effective against anything other than buildings, artillery and ships, but makes up for this fact by being extraordinarily good at its two primary functions, namely taking down artillery and ships, and can protect a large area. In comparison to other units, it deals more damage versus ships than the Haudenosaunee Light Cannon (400 vs 210 unupgraded). While it doesn't match the extended range of the Mortar or Morutaru, it is far more accurate against a moving ship.

Unless an opponent is building cannons or a strong navy, Culverins have little use in most games. Some may want to keep a few around just in case of a ship or artillery attack, while others would consider it a waste of resources to build a unit which doesn't counter anything currently in play.

Due to their sizeable range, Culverins can adequately defend a shoreline from most ships as they have more range than all ships except Monitors and Ironclad. Not even the ships using "Offshore Support" or "European Cannons" will have a greater range than a Culverin, they come up one point short of matching its range. When combined with the even higher anti-ship range of Outposts and Town Centers built near the water and walls along the shore (preventing troops from being unloaded), the player will be safe inside their turtle shell until Monitors are able to be produced by the enemy.

"TEAM Engineering School" is also available to the Swedes (in the Industrial Age). 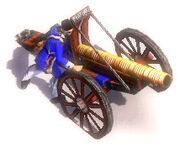 A Culverin in Bombard mode

A Culverin in Limber mode

A Culverin Royale in Bombard mode

A Culverin side view

Culverin in the original version and Definitive Edition
Community content is available under CC-BY-SA unless otherwise noted.
Advertisement