The Cuirassier is a melee heavy cavalry unit in Age of Empires III that is unique to the French and can be trained at a Stable, Fort, and Galleon. It is one of the strongest cavalry units in the game.

Cuirassiers can only attack in melee combat, but deal splash damage, which makes them extremely effective against large armies but are still vulnerable to heavy infantry and ranged cavalry. If combined with Imperial Voltigeurs, they form a deadly combo which is often used by French players and very hard to counter if properly managed. They are also very efficient at defeating enemy artillery, due to their AoE attack.

Compared to the Hussar, the mainline cavalry of most other civilizations, Cuirassiers have relatively high hit points, nearing that of a Spahi and behind a Mameluke. Their relatively high health allows them to tank heavy infantry, and to a lesser extent, enemy cavalry (excluding Imperial War Wagons, who can kill them in a few hits). However, Cuirassiers' attacks do AoE damage, surpassing Hussars in almost any situation and makes them a good, cheap method to deal with clumped groups of enemies, although Falconets and Heavy Cannons are better suited for this task.

Massing a large amount of Cuirassiers can be extremely expensive, due to their very high cost. However, this can somewhat be remedied because of the Coureur des Bois, who have a slightly faster gathering rate. If this is not enough, players can set both Factories to Coin while having Coureurs collecting food and coin from their respective sources. In addition, a large amount of population will be needed when massing them, as they cover 3 slots each, preventing the player from making any support units if they have a relatively large number of Coureurs gathering resources.

As many French players carry a mix of Gendarmes and Voltigeurs as their army composition, they can be hard to counter as heavy infantry will be disposed of quickly from the Voltigeurs' bonus damage against heavy infantry, and Skirmishers and archers will quickly be cleaned up by the Gendarmes' AoE attacks. However, German armies are a great threat because of their powerful anti-cavalry units. Doppelsoldners, while being heavy infantry (and therefore weak to Voltigeurs), can deal a lot of damage and their AoE attacks ensure that nearby enemies will get hurt also, like the Gendarmes' attacks. War Wagons make it worse as they can deal up to 250 damage per hit against melee cavalry and literally punch through groups of Gendarmes with little effort. The best counter to the Gendarmes and Voltigeurs combo would be making only heavy hand cavalry, as they counter Voltigeurs, and trade more or less equally with Gendarmes in terms of cost-effectiveness.

Mercenaries are an effective counter as well, particularly Ronin (which cost the same with the "Mercenary Loyalty" Home City Card) which can be guaranteed at a Saloon via the "Dance Hall" card due to posessing high hit points, melee resistance and area of effect damage of their own. The Dutch excel at this strategy due to the significant gold bonus provided by their Banks.

The Japanese may use Ronin as well, paying slightly less export to gain them (Hatamoto Samurai) than other civilizations pay in coin (even with the "Mercenary Loyalty" card). However, Hatamoto Samurai are not exactly identical to Ronin, and export gathers slower than all other resources.

The Cuirassier starts at the Veteran level, giving them +20% hitpoints and attack. 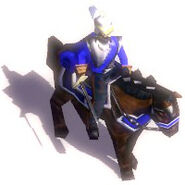 Stats of a Veteran Cuirassier

Stats of a Gendarme Cuirassier

Stats of an Imperial Gendarme 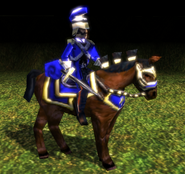