The Cuerudo (previously Vaquero) is a revolutionary outlaw in Age of Empires III: Definitive Edition that is unique to Mexico.

As with Revolutionaries, revolting into Mexico will turn all Settlers into Cuerudos, and they can be trained in place of Settlers at Town Centers.

Cuerudos are similar to Comancheros, but with the following differences:

Cuerudos can be upgraded to Charros with the namesake Home City Card, which gives their melee attack a 3.0× multiplayer against infantry and a range of 2.

As Cuerudos are unique to Mexico, only technologies that their base European civilizations have access to are shown in the following table:

As Cuerudos are unique to Mexico, only their base European civilizations' cards and other civilizations' TEAM cards are shown in the following tables (for the base civilization, non-TEAM cards will only be applied if they are sent before revolting):

Vaqueros are Mexican horsemen who tended to livestock who originates in the Iberian Peninsula. They serve as the inspiration for cowboys in North America.

On the other hand, charros are horsemen from Central Mexico which acts as the counterpart of vaqueros but with distinct differences including clothing, mannerism, and social status. During the Mexican War of Independence, many charros serve for both the Mexican revolutionaries and the Spanish Crown. 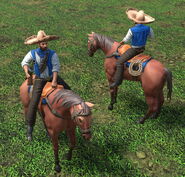 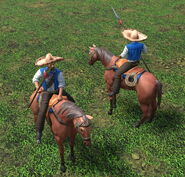