Age of Empires Series Wiki
Register
Don't have an account?
Sign In
Advertisement
in: Age of Empires III, AI personalities, Aztecs, The WarChiefs

Cuauhtemoc (1497 - 1525) is the AI personality of the Aztecs in Age of Empires III: The WarChiefs. He is voiced by Juan Monsalvez.

Cuauhtemoc is mischievous and intense as well as somewhat deranged. He frequently desires sacrifices and enjoys bloodshed. Cuauhtemoc does not seem to value the lives of anyone, including his allies and even his own people. He will sometimes make jokes and refers to himself in the third person.

Cuauhtemoc has a tendency to task more of his Villagers to Farms to gather food in comparison with the European and Asian AI personalities.

When at its peak, it is common for Cuauhtemoc's army to be the largest in the game among AIs.

Cuauhtemoc is fond of attacking early, after advancing to the Commerce Age. His initial army is usually comprised of a mixture of Coyote Runners, Puma Spearmen and Otontin Slingers. He tends to specialise in one of these types of units, supported by smaller numbers of the other two. As the game progresses, he adds Jaguar Prowl Knights, which will become the backbone of his forces if conditions allow. Cuauhtemoc greatly prefers to ransack enemy cities using hordes of massed infantry, however he will sometimes send groups of Arrow Knights as well (particularly on higher difficulties). Eagle Runner Knights only appear in small numbers if at all. Since Cuauhtemoc favours being aggressive early in the game, it can take longer for him to advance to the Industrial Age. From this point, he still prefers to attack with same amount of troops, albeit less frequently. If left alone for some time, he may eventually advance to the Imperial Age and attack with Legendary troops, typically Jaguar Prowl Knights. As with the other Native American personalities, Cuauhtemoc has a weak navy and is at a disadvantage at sea. Despite this, he will attempt to remain competitive through the use of War Canoes.

Base layout and defence[]

Cuauhtemoc's base tends to be smaller than that of other AI personalities. He will usually clump his houses together in a single spot near his Town Center. He tends to build one War Hut and 1-5 Nobles' Huts which serve as his defence. However, Cuauhtemoc relies on his army to do most of his defending as his defensive buildings often don't cover his entire base. Overall his town's structure is inferior to that of the European and Asian civilizations.

Cuauhtemoc is much weaker in the Definitive Edition. He tends to focus more on inferior units such as Otontin Slingers and less on Jaguar Prowl Knights. His economy is also poor and vulnerable to raiding.

In a 1v1 situation against various other AIs on standard settings, Cuauhtemoc will lose around 70% of the time. 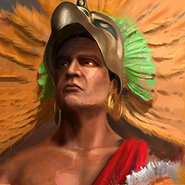 Wikipedia has an article about:
Cuauhtémoc
Community content is available under CC-BY-SA unless otherwise noted.
Advertisement