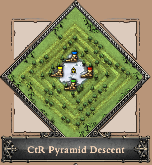 CtR Pyramid Descent is a Capture the Relic map introduced in Age of Empires II HD: The Forgotten.

Fundamentally, the map is one big diamond-shaped hill. The elevation of the map is similar to the slope of a pyramid, hence of the map's name. The farther away players gets away from the center, the lower one gets in elevation. The outer areas of the map appear grassy, with the center appearing as a sandy area covered in snow. The very center of the map - where the Relic is - is a mossy concrete.

The patches of trees found in this map "line up" with the angle of the hill they are on. There is almost a set pattern with how the trees are distributed. Aside from the trees, the map is very open, with no other land obstructions. There is no water, making Docks impossible to build. The animals found on the map are Sheep, Deer and Wild Boars. There are no Berry Bushes, meaning that animals and Farms will be the only source of food.

There is a standard distribution of Gold Mines and Stone Mines, and some may even be found right next to each other. The number of animals found on this map are high compared to most others, but due to how open the map is, it is very easy for players to steal these animals from each other.

View of the map's center with the Relic.