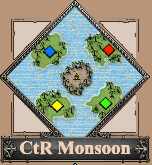 CtR Monsoon is a Capture the Relic map in Age of Empires II.

Each player starts on a fairly large island that has plenty of gold and wood, but limited food via berries, huntables, and herdables, and minimal stone. The rest of the map is all shallows with no fish.

The center of the map features a small, circular island barricaded by trees, in which sits a single Relic.

Given the limited room each player has to build on this map, building forward bases or castle dropping is a less effective affair, as is tower rushing. However, each player has the option to choose between rushing each other with land units, or with a navy. Land units can clash with naval units frequently on this map, since the entirety of the water of this amphibious map is shallows that can't be built upon, but can still be walked or sailed in.

Getting to the center Relic is an affair best left to careful planning. Chopping through the ring of trees protecting the relic is easy, but defending that center island from other players is the hard part. Thankfully, players can choose between a standing army or a floating navy to defend the center Relic until its time to retrieve it.

The shortage of food on this map is partial to civilizations with economic bonuses in the form of decreased costs, such as the Hindustanis, Malians, Teutons, and Vietnamese. Naval booming civilizations like the Malay, Japanese, and Italians will also have an advantage on this map.