The Crossbowman is an archer in Age of Empires III that can be trained at Barracks, Fort, and Galleon.

Crossbowmen are only available to the French, Germans, Portuguese, and Spanish.

Crossbowmen are light infantry units that use crossbows in battle. They are counter infantry units that are useful for attacking heavy infantry such as Musketeers, but are easily defeated by melee cavalry and artillery. They are similar in many ways to Skirmishers. Although the Crossbowmen might be out-ranged by their Skirmisher counterparts, they are cheaper and are trainable earlier in the game. The exceptions to this rule reside in the Dutch who can train Skirmishers in the Colonial Age and the French through the use of TEAM Early Skirmishers which allows them and their allies to train Skirmishers in the Colonial Age.

Spanish players have the option of being able to almost instantly train (2.7 seconds) Crossbowmen and Pikemen in the Colonial Age, due to the TEAM Archaic Soldier Training and Fencing School cards, and can train instantly if the cards are also used with the Standing Army improvement.

"Handheld crossbows began to appear in the tenth and eleventh centuries. Crossbowmen were attractive to military leaders because they took much less time to train than archers using bows. Firearms eclipsed Crossbows by the end of the sixteenth century.

Europeans, chiefly the Spanish, included crossbows amongst the muskets and cannon they brought to the New World. Cortes arrived with more than two dozen crossbows and less than ten muskets. Columbus' crew had crossbows when they landed in the West Indies. When the original stockpile of munitions ran out it was difficult or impossible to make or trade for more. Explorers had to be very careful with their limited supply."

The in-game stats of a Crossbowman

The in-game stats of a fully upgraded Veteran Crossbowman 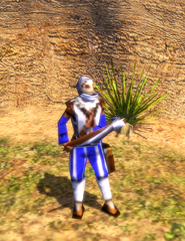 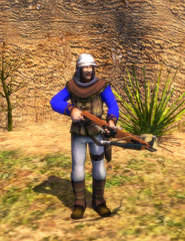 Crossbowman detailed model for cutscenes.
Add a photo to this gallery

Retrieved from "https://ageofempires.fandom.com/wiki/Crossbowman_(Age_of_Empires_III)?oldid=256391"
Community content is available under CC-BY-SA unless otherwise noted.