All except Bulgarians and Spanish

The Crossbowman is an archer unit in Age of Empires II that can be trained at the Archery Range once the Castle Age is reached. It is good against infantry and Villagers, but struggles against cavalry, Skirmishers, and siege weapons.

Crossbowmen are available to all civilizations except for the Bulgarians and Spanish.

Upgrading to Crossbowman reduces the training time of Archers from 35 seconds to 27 seconds, making this a critical upgrade if the chosen strategy is/involves massing Archers. Archers get considerably stronger in larger numbers by getting the capability of killing enemy melee units before they can close the gap and attack. Creating Crossbowmen is a good choice as they are cheap to produce and provide good covering fire. They work especially well with infantry in this regard. On the offense, it is better to put Crossbowmen in a group of melee infantry as ranged attacks are weak against buildings. The Spearman line is an excellent deterrent for cavalry, while friendly cavalry can counter siege units and Skirmishers.

If the player already invested in a Feudal Age Archer rush, upgrading to Crossbowman should be a top priority. In the Castle Age, the main counters to archers become available: Knights and Mangonels. Knights have high pierce armor, high HP, and fast speed, allowing them to decimate archers if both are in small numbers. When the archers reach a critical mass however (and preferably are entrenched in a tight space), they can kill Knights in one volley, evening the odds, or even overcoming them. Mixing in a few Spearmen, or their upgrade, the Pikeman, can also help fending off Knights, but this is taxing on the economy. Mangonels are an effective pair to crossbowmen. They have a high Area of Effect attack, allowing them to quickly and cost effectively mow down large groups of archers. A fight between archers and Mangonels comes down to which player has better micromanagement. A good supplement to archers against Mangonels are Light Cavalry or Knights, but again, this is rather taxing on the economy.

Another counter to Crossbowmen are Elite Skirmishers, who cost no gold, but their drawback is that their only use is against archers, as they are woefully ineffective at fighting other units, and they are also poor raiding units.

The Archer line, with the Crossbowman in the middle.

The Archer line, with the Crossbowman in the middle, in the Definitive Edition. 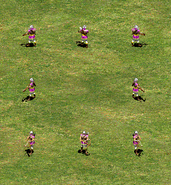 A group of Crossbowmen

A model of a real-life Crossbowman

Crossbowmen in the Definitive Edition

Crossbowmen at the Martyrdom of St Sebastian, 1475. 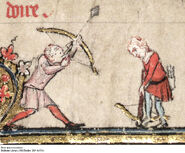 An archer & a crossbowman from a medieval English manuscript 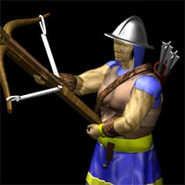 A render of the Crossbowman model
Español
Community content is available under CC-BY-SA unless otherwise noted.
Advertisement