"Cree rifleman with a good line of sight and long range."
—In-game description

The Cree Tracker is a ranged infantry native warrior in Age of Empires III that can be trained at a Trading Post built on a Cree settlement.

While most other archer or skirmisher-type units in the game have hit points that range from 95 (Longbowman) to 230 (Cherokee Rifleman) Cree trackers boast an impressive 300 hit points. However, their ranged resistance is rather low along with their base damage and they fire slowly compared to some units (3.0 vs. 1.5 for longbowmen and some other natives).

They are merely average in combat against a similar number of more cost effective units, however they cost no population and in numbers can easily take on small groups of some cavalry and defensive buildings due their hit points. Civilizations which possess cards, or aura effects (Japanese Shogunate, Spanish unction, etc.) augmenting the trackers will find more use with the unit than those which do not have any Home City Cards or aura effects improving them.

The primary advantage of Cree Trackers is their excellent range for a Colonial Age unit. While most ranged infantry in the Colonial Age tend to have 12-16 range, Cree Trackers share equal range with Gurkhas, allowing players to more effectively kite against heavy infantry or other, lower-range infantry.

"The Cree were hunters, trappers, and nomads who traveled throughout the northern parts of North America. Plains Cree traveled south to follow the buffalo herds of the Great Plains. Forest Cree stayed in their lands hunting caribou, elk, and deer. They adopted horses, though not to the extent that the Comanche did, and used canoes, snowshoes, and dogs to travel the sometimes harsh environment of their homelands. The Cree were formed into loose warrior societies, much less formal than many other native groups. When the Cree fought, they used bows, clubs, axes, and rifles." 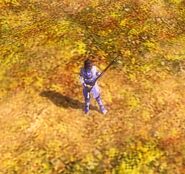 An in-game Cree Tracker
Add a photo to this gallery
Retrieved from "https://ageofempires.fandom.com/wiki/Cree_Tracker?oldid=279620"
Community content is available under CC-BY-SA unless otherwise noted.