Deceased (historically)
Alive (as of Battle of the Little Bighorn)

More specifically, Chayton Black and Crazy Horse gather the Sioux and Cheyenne nations to fight against Custer's troops in the Battle of the Little Bighorn.

In the Definitive Edition, Crazy Horse was replaced by Frank Warbonnet.

Crazy Horse behaves identically to the Lakota War Chief in random map games, only with more hit points and less attack, and the ability to heal friendly units similar to Healers. 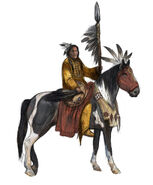