As an outlaw, it has a reduced coin cost, but takes more population spaces. Due to their increased ranged attack, Crabats prove to be useful against almost all units. However, players tend to prefer standard ranged cavalry which use less population spaces.

Since update 13.9057, Crabats can be obtained after revolting to Hungary or Romania, as these nations grant access to the "12 Crabats" shipment, which also enables their creation at the Tavern, Stable, Fort, Galleon, and Outpost (Blockhouse for the Russians).

The Cavalry Combat card is available to Dutch, French Italians, Ottomans, and Russians.
The Riding School card is not available to Chinese, Japanese, Maltese, and Spanish.

The Crabat speaks Croatian, a Slavic language which is a standardized variety of the Serbo-Croatian pluricentric language, related to the Serbian, Bosnian and Montenegrin languages. This is also spoken by the Bosniak, Mounted Infantry, Pandour, Schiavone and Shock Rider.

Crabat image from the Compendium section 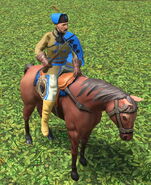 An in-game Crabat
Community content is available under CC-BY-SA unless otherwise noted.
Advertisement