The Coyote Runner is a melee light infantry in Age of Empires III: The WarChiefs that is unique to the Aztecs and can be trained at the War Hut once the Colonial Age is reached.

The agile Coyote Runner is a unique class of unit that is able to fulfill the role of a cavalry at a lesser cost and effective against long-range infantry and artillery, but vulnerable to heavy infantry and ranged cavalry.

Coyote Runners are not classed as true infantry and, as such, do not take multipliers from units such as Falconets or Naginata Riders. They behave like cavalry in every way, except that their counters have a smaller bonus against them.

Coyote Runners make decent early raiders and are very effective against early ranged infantry, such as Strelets or Crossbowmen. The War Dance allows them to get very high damage in all ages. By shipping Coyote Combat, they are able to catch up to and snare most other cavalry, which can then be taken down with any of the Aztecs' many anti-cavalry units.

In Fortress Age, the temple support card can be used to greatly increase the Coyote Runner's attack (which stacks with the War Dance), and/or with Ruthlessness to vastly improve their raiding characteristics. Coyote Runners are well-rounded units, but behave similarly to Uhlans, having a high attack per population when compared to its low HP.

Combined with Eagle Runner Knights, they make a fearsome combo, countering most things, and negating entirely the usual weakness of Aztec armies to artillery. Eagle Runners are able to beat cavalry, Musketeers, and other ranged cavalry, while Coyotes block fire and take down ranged infantry. Only very fast melee infantry (Rodeleros are a good example) or extremely good ranged cavalry are a real threat to this composition.

Coyote Runners also possess Cover Mode (unlike other cavalry, which have trample mode), which if used halves both speed and attack, but gives them a 50% resist to both ranged fire and siege damage, allowing them to soak up an incredible amount of damage. Doing this is only advisable in small numbers and with a large number of ranged units behind to do damage while the Coyote Runners tank enemy fire. To illustrate, a Coyote Runner upgraded to Elite and with Coyote Combat in cover mode shipped will have roughly 435 ranged/ siege hit points, meaning it would take 5 unupgraded Falconets or over 30 Veteran Skirmishers to take a single Coyote Runner down in one volley. Utilizing cover mode takes good timing, but can completely change a fight if used well.

As Coyote Runners are unique to the Aztecs, only technologies that they have access to are shown in the following table:

As Coyote Runners are unique to the Aztecs, only their cards and other civilizations' TEAM cards are shown in the following tables:

"Humorous, playful, and unpredictable, the coyote was considered sacred to the Aztec as well as many other Native peoples, and the Aztec coyote runner strove to emulate the animal's qualities in battle. Coyote runners wore teeth and fur to symbolize the coyote's physical appearance, coupled with bright colors and feathers to illustrate its capricious nature.

The coyote runners were all left-handed because that made them more dangerous in combat."

The Coyote Runner from the in-game history section

Model of the Coyote Runner

Model of the Elite Coyote Runner 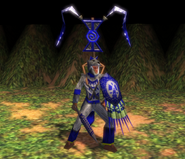 In other languages Edit

Retrieved from "https://ageofempires.fandom.com/wiki/Coyote_Runner?oldid=257893"
Community content is available under CC-BY-SA unless otherwise noted.