Age of Empires Series Wiki
Register
Don't have an account?
Sign In
Advertisement
in: Article stubs, Age of Empires III, Outlaws,
and 3 more

As Cowboys are unique to the United States, only technologies that they have access to are shown in the following table:

As Cowboys are unique to the United States, only their cards and other civilizations' TEAM cards are shown in the following tables: 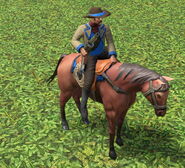