Age of Empires Series Wiki
Register
Don't have an account?
Sign In
Advertisement
in: Age of Empires II, Lords of the West, Cavalry

The Coustillier is the first unique unit of the Burgundians in Age of Empires II: Definitive Edition - Lords of the West. It is a medium cavalry unit that "charges" its attack over a period of time, dealing increased damage on its first attack against an enemy unit.

The Coustillier can charge its attack up to +25 (+30 for Elite) melee damage (with base melee damage inflicted as well). The effective charge attack is the result of subtracting the total armor value (including upgrades) of the target unit from the coustilier's base attack + charge bonus + attack upgrades.

When trained, Coustilliers have their charge built up at maximum. Upon catching up with the enemy unit (i.e. entering the attack animation), it takes 0.6 sec for the Coustillier to inflict its first charged blow (marked with a unique attack animation) after which the animation switches to regular, and the Coustillier deals usual damage. It takes 40 seconds for the ability to be recharged for both Elite and non-Elite Coustillier. The Charge attack does not affect buildings and is not triggered when Coustillier is attacking them.

One way to maximize the usefulness of its charge attack is by Hit-and-Run, and this way, Coustilliers are able to diminish even armies of Halberdiers if the timing of the charge is correct. This quirk makes Coustilliers extremely useful against slow-moving units as well; however, micromanagement is very important. Because of this, the best counters against Coustilliers are Camel Riders, Paladins and Eagle Warriors to a degree, or by outnumbering them with Halberdiers. It is stated that the Monks can counter them, but Coustilliers can kill Monks in one hit with their charge attack. However, if a Monk successfully converts a Coustillier, the newly converted unit will attack their fellow cavalry with their charge, potentially ruining the momentum of the attack.

If used for sustained attacks, Coustilliers are inferior to Cavaliers and Paladins, even if the Charge attack is taken into account. This is due to its inferior normal attack and rate of fire compared to the Knight-line. Also, Coustilliers have fewer hit points. Factoring in charge attacks in sustained combat, the standard version has +1.19 attack and the Elite version has +1.42 attack. While the Coustillier can rival the Burgundian Cavalier (+5 HP), the Elite Coustillier steeply falls off compared to the Paladin (+15 HP and +1 pierce armor; ability to retain value in sustained combat and against buildings), even before considering the cheap Paladin upgrade. However, Coustilliers have a significant advantage, as their cheap cost will make them easier to mass. Also, they do not have to be upgraded in the Castle Age, while the Cavalier upgrade needs some time to research. Despite being subpar from Burgundian Paladins, they can still defeat Celtic and Byzantine Paladins, and crush all non–Bulgarian Cavaliers. When facing some unique cavalry like Cataphracts and Tarkans, Coustilliers can still beat them, and they even cost less.

At most times, Cavaliers are preferred in the Castle Age, but if the enemy is an archer- or some infantry–based civilization, Coustilliers perform better than Cavaliers, since their charge attack will be lethal for most archers, and to some degree infantry. They cannot strike down Crossbowmen with armor upgrade researched, but it will be enough to kill them with another common attack. In the Imperial Age, an Elite Coustillier will kill an Arbalester if the Burgundian player has only Iron Casting researched. While they are slower than Cavalry Archers, Coustilliers are still a good option to kill Cavalry Archers, as they have enough pierce armor to resist the arrow from the latter. Also, kiting the Coustilliers will give time for them to reload the charge time, giving a potential threat for Cavalry Archers, which are also fragile to the charge attack.

Probably one of the best uses of the Coustillier is as a raiding unit, since its charge attack enables them to kill Villagers with two strikes (one for the Elite version), so a powerful strategy is to atract attention at another front so the enemy army is busy dealing with a distraction and then attack the back of the opponent settlement with the Coustilliers. The focus should be on the Villagers only, and not the buildings. This way, the player can diminish the opponent's economy very quickly.

As Coustilliers are unique to the Burgundians, only technologies that are available to them are shown in the following table:

Coustilliers started out in France, as low-ranking yet professional infantrymen in a lance fournie of a squire, man-at-arms, or knight. Coustilliers were first mentioned in a 1445 French ordinance, Bretons and Burgundians later also trained their own Coustilliers. 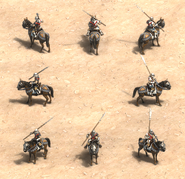 Different views of the unit. 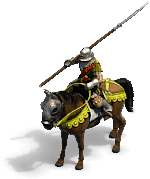 Sprite of the Coustillier in Lords of the West.

Archer, Man-at-Arms, and Coustillier in Compagnie d'Ordonnance of Charles VII of France. 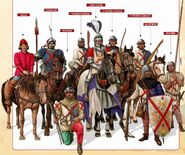 First charging attacking animation of the Coustillier, followed by standard attack animations. Against a Ballista Elephant.