Age of Empires Series Wiki
Register
Don't have an account?
Sign In
Advertisement
in: Age of Mythology, Atlantean buildings, Classical Age,
and 2 more

Age of Mythology: The Titans

1200
The Counter-Barracks is a Classical Age building in Age of Mythology: The Titans that is only available to the Atlanteans. It is where the Atlantean counter units are trained and where technologies that improve them are researched.

All the units trained in this building are hard counters, that is, they excel against their target unit but are weak against practically everything else. However, the Katapeltes has a bonus against siege weapons and the Cheiroballista is good against ships.

Note that the Atlanteans have no need to research Medium Archers, as they gain this technology for free.

All civilizations the world has seen so far have had the need to train soldiers for defense, at least, if not aggression against neighbors. For many this training took place at a barracks, which served as both a living quarters and training ground. New recruits were assigned to the barracks and after a training period they were ready for service. At the barracks they learned the mechanics of their weapons, the drill of battlefield movements, and the discipline required to obey orders in combat. 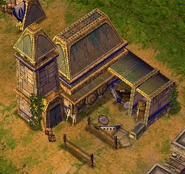